• The long-awaited release of iOS 16 brings a wealth of new customisation features.

• It will work with the iPhone 8 and later.

The revamped Lock Screen is the most noticeable improvement.

IPhone owners can finally enjoy iOS 16’s magic. The iOS 16 upgrade does give the iPhone some deluxe features that are much-needed, while not being as groundbreaking as its earlier updates. We have a lot to discuss, including a Lock Screen that is more vibrant and programmable, editing and undoing iMessages, and scheduling emails in the Mail app.

Therefore, scroll down to appreciate a summary of everything iOS 16, including its top features, compatible hardware, and other information.

IOS 16 and watchOS 9 were made available to the general public on September 12, 2022. We have been testing and investigating it via developer and public beta since it was unveiled on June 6 at the WWDC 2022.

The “largest update to the Lock Screen yet with new features that make it more beautiful, personal, and helpful,” as described by Apple. And we concur; let’s look at why.

What iPhone models will receive iOS 16?

Every year, Apple follows a particular theme that guides the overall layout and course of the update. The themes of customization and collaboration dominated this year.

1. A Lock Screen That Is Smarter

A change that has long been sought for by all has now materialized. Although there are some local tweaks, the overall avatar is the same as Google’s Material.io. Overall, you will receive

• A multilayered look – It skillfully places the wallpaper’s subject in front, giving the impression of depth, very similar to the portrait watch faces on the Apple Watch.

• Modifiable appearances – You can alter the date and time’s style, color, typefaces, and other elements.

• Gallery for the lock screen A gallery with several different backdrop selections that closely resembles the Apple Watch face may be accessed by swiping left or right.

• Auto-shuffle images – The Lock Screen wallpapers can shuffle automatically, just like the dynamic wallpapers on macOS.

Oh yes! Now that we have lock screen widgets, you can quickly check the time, date, battery life, weather, upcoming events on the calendar, alarms, and more. The WidgetKit API is also provided to developers so they can create their own Lock Screen widgets. 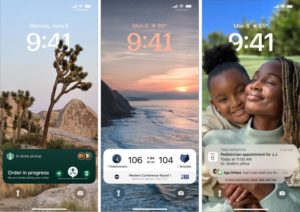 The Live Activities block provides you with real-time information; think of them as proactive widgets. For example, a music app will display what is now playing, and you can also follow the status of your orders or transportation, view live sports scores, and do other things.

The Lock Screen will feature an enlarged list view at the bottom of the screen rather than stacking the notifications.

2. Messages that can be changed or removed

I am pleased to say that Apple implemented it before Twitter! Messages can now also be edited for up to 15 minutes after sending.

• You can cancel sent messages up to 15 minutes after they are sent.

• Mark unread messages as such.

• Up to 30 days after deleting a communication, you can recover it.

• Collaboration invitations and updates; Shared with You API;

Check out these sources if you’re interested in mastering the iMessage game:

In iOS 15, Focus was able to have a significant impact. Apple has since improved the feature and significantly tightened the loose ends. Focus iOS 16 boasts

• Linking your lock screen to your focus mode can help you stay focused on your current task, whether it be personal or professional.

• Page ideas on the Home Screen 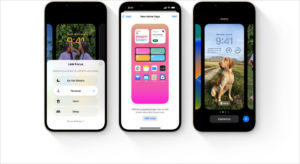 Prior to this, a focus mode could only be used to establish restrictions on calls and app notifications. With iOS 16, however, the supported apps offer adjustable filters. According to Apple’s explanation,

Also Check   15+ Best Tech Startups that are Changing the World

Notably, Apple also provides a Focus filter API that enables programmers to include the function in their applications.

An improved, more intelligent version of smart albums that allows you to share an iCloud Photo Library with up to five additional people. But why, you might also ask, is this a better choice? Due to the following collaborative features that it includes: • Equal permissions to add, edit, favorite, caption, and delete.

• Smart sharing – Manually enter photographs or apply filters based on the start date or users.

• Bluetooth proximity – This function is unique in that it can enable automatic sharing when other devices are nearby (family sharing).

The information has been spreading for a while. You may now use your Face ID or Touch ID to unlock or log into multiple accounts thanks to a FIDO protocol.

And the Apple ecosystem is not the only one affected. It also applies to Windows and Android devices. In addition to being a seamless system, it safeguards consumers from website leaks and phishing attacks.

Additionally, the feature promises improved data detection. You may monitor shipments and flights, translate between tongues, change currencies, and more.

7. Use Visual Look Up to eliminate background

You may now select the subject of an image from Photos, Screenshot, Quick Look, Safari, and more. This is a minor but noteworthy change. In essence, you don’t need to launch another app. In iOS 16, the Visual Look Up capability is included. The best feature is the ability to drag, drop, and share the recovered image via Mail, Messages, and other services.

Undoubtedly a long-overdue update. Now that iOS 16 has been released, you can dedicate and type at the same time.

The main announcements in this area include: • Tap to Pay, which enables businesses to take payments from customers using iPhones (no additional machine needed).

• Apple Pay Later – You may divide Apple Pay purchases into four equal payments over the course of six weeks thanks to this company’s zero-interest EMI program.

• Securely share your ID with third-party apps for age or identity verification by saving it in your wallet. Notably, you may control what information is shared; for example, you can choose to disclose the age just rather than the precise date.

10. A home app for taking medications

Apple has the ideal solution if you frequently overlook taking your meds on time or have parents who do so. You may now maintain a list of your prescription drugs, vitamins, and dietary supplements, as well as make individual schedules and reminders for each.

Additionally, you may keep track of these prescriptions in the Health app and allow your doctor or caregiver access to the information.

• Battery level: Oh, Yes! The option to display battery life on the status bar is now available for iPhones with notches. There is a catch though; not all gadgets support the capability. Check the link instead of jumping out, thus.

• Multi-stop routing in Maps – Include rest stops, fast meals, fuel/charging stations, and other pit stops along your journey.

• Safety Check – Users will be able to rapidly reset the access allowed to other individuals and apps thanks to a new section in Settings. This is intended primarily to assist victims of intimate partner assault, according to Apple.

• Better parental control – Using Quick Start and the appropriate controls now makes it much simpler to set up a child’s device. Additionally, Screen Time requests are now sent to you via SMS.

• The next iteration of CarPlay will have several aesthetically pleasing features to make your trip as comfortable as possible, even though the vehicles won’t be revealed until late 2023.

• Home app redesign – a Home app that is better coordinated and arranged and makes navigation and controls easier. Additionally, it will adopt the universal standard Matter later this year to increase the range of supported devices.

I wish you a wonderful time as you discover all of iOS 16’s new features. Check out these hidden iOS 16 features if you’re craving more information. In the extremely unlikely event that we missed something, please feel free to submit your findings in the section below.