Why Ted Lasso Season 3 has Been Postponed Excited about ted lasso season 3? Today, we’ll let you know why ted lasso season 3 has been postponed unfortunately. One of the most watched and significant comedies on Apple TV+ is Ted Lasso. Apple has been working on the third (and potentially final) season of Ted Lasso, which has won numerous awards and has a growing fan base. But according to a recent source, a few things have delayed the start of Ted Lasso season three.

Why Ted Lasso Season 3 has Been Postponed 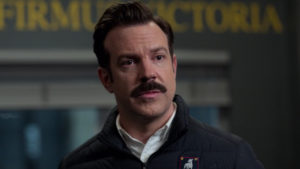 According to Puck (via Vulture), actor and creator Jason Sudeikis, who plays none other than Ted Lasso in the program, is one of the key reasons Apple TV+ hasn’t yet published the third season of Ted Lasso. Twelve episodes are anticipated for the third season, however they haven’t been decided.

According to the rumor, “Sudeikis’s perfectionism” was to blame for the third season’s postponement. Since September 2021, production has begun working on brand-new Ted Lasso episodes. However, numerous episodes have been completely rewritten after April 2022 in order to alter the storylines of some characters.

The fact that some of the filming locations, including Chelsea Football Club’s stadium, are presently closed only serves to confuse matters further. The stadium has been “locked for some time” since the Ukrainian invasion obliged the stadium’s owner, a Russian tycoon, to sell it. The stadium must now be digitally rendered in these scenes, which requires additional post-production.

The budget for the series has also started to cause internal problems. According to people with knowledge of the situation, Apple TV+ and Warner, the show’s producer, have some differences on who is responsible for covering the production costs. Ted Lasso’s current episode wage ceiling is $150,000.

At the 74th Emmy Awards, 52 different Apple TV+ programmes were nominated in various categories.
The night’s biggest prize went to Ted Lasso, who defeated other equally fantastic shows to win the title of “Outstanding Comedy Series” (Abbott Elementary, Barry, Curb Your Enthusiasm, Hacks, Only Murders in Building, What We do in the Shadows).

Many people expected Jason Sudeikis to reveal the third season of Ted Lasso’s release date during his victory speech, but that did not occur. We’ll see you for season three at some time, he merely teased. Ted Lasso seasons one and two are currently available on Apple TV+.