HomeGAMESShould I play Quordle or Dordle? 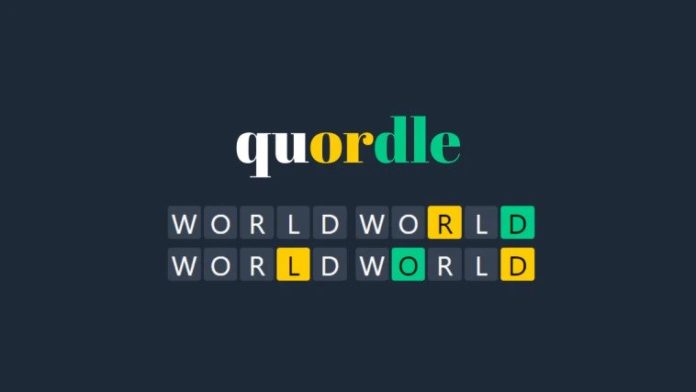 Should I play Quordle or Dordle?Here’s a brief description, of whether you should play quordle or dordle video game.

The first simultaneous Wordle version I encountered was called Dordle. It’s a double Wordle, and your objective is to complete both in seven guesses or less. Each of your guesses is submitted for both puzzles simultaneously. Since problem #0002, I’ve been playing the daily Dordle, but now I found out that I’ve been missing out on Quordle, which lets you play four puzzles simultaneously. after only nine guesses.

Follow the article and you will find your interest.

First off, each of these games offers two puzzles: a “free” or “practise” puzzle with a unique answer each time, and a “daily” puzzle that is the same for everyone. Therefore, yes, someone who is truly obsessed can play four puzzles at once all day. You can benefit from practise games while you’re learning the ropes, at the very least.

I’ll get to the plan now. Regardless of how many puzzles you solve, I like to think of guesses as providing a response to one (or more) of the following three questions:

Playing the game solely with tactic #3 is a mistake. You’ll quickly learn that making educated guesses is crucial, and you’ll choose word choices that effectively address issue 1. (My mnemonic for the English alphabet is ETAOIN SHRDLU, which is pronounced “Edwin Shirdloo” as if it were a name. I always start sentences with letters from this list.)

Multiple #1 and #2 guesses are necessary for simultaneous Wordles. You need to keep asking yourself: What can I learn from this guess? If you mix a yellow from one word (#2) with some brand-new letters (#1) and a yellow from another word (#2 again), you might be able to solve two puzzles at once with the same guess.

Since your attempted solution on one puzzle is a guess that will likely be meaningless for the other, you shouldn’t attempt a #3 guess until you are fairly certain of the answer (s).

How to do four Wordle puzzles simultaneously

Let’s examine this in practise now. You should not be concerned about spoilers because the puzzle I’m working on (which is depicted in the image up top) is a “practise” puzzle.

Three of the puzzles are hit upon starting with TRASH. To continue working on the upper right puzzle, I chose the word CLINK because it contains frequent letters but doesn’t repeat any of the ones we’ve already attempted.

Although there is still only one yellow in the upper right puzzle, we are now in a fairly strong position because the lower two puzzles each contain four confirmed letters, some of which are even greens. It’s also not bad to see three on the upper left. Let’s continue adding new letters (#1) to the mix as we construct future guesses (#2s and #3s for the problems where we’re close). This will help with the top right.

The lower left must be CHAS_, giving us either CHASE or CHASM. This is probably the first one we can solve. In my arrogance, I choose CHASE, which is incorrect but at least includes an E. I then solve using CHASM, after which I evaluate what I’ve discovered since introducing that E.

It’s either STAKE or SKATE because the lower right is A E with an S, a T, and a K tucked away somewhere. Instead of choosing one of those as my next option, I want to rule out a few options. I’d like to add one or two more unidentified letters to the upper right problem because I still don’t know where that L belongs. Additionally, it wouldn’t hurt to add an A somewhere to the top left, where we are aware that one is present but are unsure of its location.

I choose ATOLL since it provides helpful hints for all three. Now that we are aware that the top-right problem has an O, there are multiple places where the L cannot exist. The upper left must be either AIS or ISA, and my intuition tells me it’s DAISY. Also verified is that the word “SKATE” and not “STAKE” must appear in the lower right.

So, I’m going to guess SKATE and then DAISY, which finishes the top-right puzzle with a Y. There aren’t many letters available to us, but the number of letters we’ve guessed and the number of matches indicate there may be at least one double letter. I think about doubling up a letter that I haven’t yet guessed because there aren’t any Ls in the second or fourth locations, so it can’t be a double L. What might LO_ _Y accommodate? Yes, that’s all I can think of is LOBBY. With one left over, four riddles were completed in just eight guesses. Because the little squares might not fit in a tweet, you also receive a tiny shareable graphic that looks like this: