HomeGAMESSteam Vs Epic Games: Everything You Need to Know

Steam Vs Epic Games: Everything You Need to Know 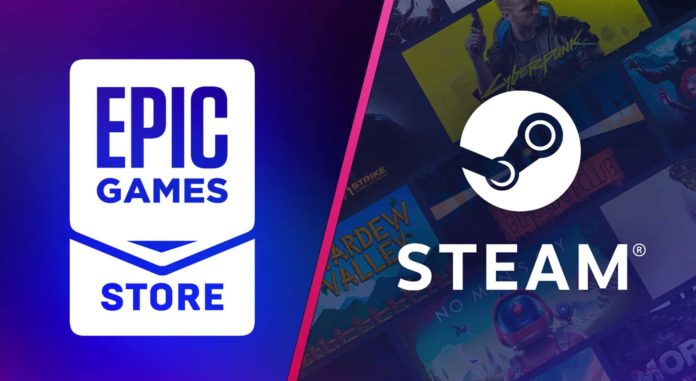 Confused between steam vs epic games? Today, we’ll show you in detail the comparison between steam vs epic games. Steam and the Epic Games Store are the two most widely used PC gaming clients. Both companies provide comparable titles broken down into sections to appeal to PC gamers. These customers also stand out because to unique features and marketing initiatives like freebies and game discounts that appeal to both game designers and players.

Steam Vs Epic Games: Everything You Need to Know

Between steam vs epic games, Steam is clearly the winner in terms of game catalog size. As of March 2021, it had over 50,000 titles available on its shop, which is a huge number when compared to the Epic Games Store’s library of less than 1,000 games.

You’ll find certain titles in both stores despite the stark difference in the amount of titles for each PC gaming client’s individual library. On the other hand, other games, like Epic Games’ Fortnite and Valve’s Counter-Strike: Global Offensive, are unique to each client.

The Discovery Queue is a function of the Steam client. Twelve new releases, well-liked games that are on sale, and games that Steam recommends are all included in each user’s individual queue. Every day, this list is updated. How Is Your Discovery Queue Generated by Steam?

Steam creates your Discovery Queue based on the most recent, well-liked, best-selling, and related items you possess on Steam. It won’t display games that you already have in your library, on your want list, or that you’ve already seen in the Discovery Queue from the day before.

Additionally, titles that are currently in demand, selling well, and similar to games you already own may be included in your daily Discovery Queue. Games you don’t like could be sent to you, therefore the “Not Interested” button is really helpful. This enhances Steam’s data on what you find uninteresting, enabling them to recommend more pertinent games in the future queues. The same holds true for books you enjoy.

Does the Epic Games Store offer a feature like that?

Regrettably, no. But given that the PC gaming client in question has a much smaller game selection than Steam, that is understandable. Only the “Discovery” page on the Epic Games Store features universally accessible material. That is one small disadvantage in terms of comparison between steam vs epic games.

New releases, current promotions, coupons, featured titles, and their current titles that are free for an extended period of time are typically included in the material. Although the clients for the Steam and Epic Games Store serve the same goal, they differ from one another in important ways. Here is a list that describes each item and how it can help you with your PC gaming needs.

“Free Game Every Week” on the Epic Games Store

Any gamer who can download a paid title for free, even for a brief period, is happy. Users can add a purchased game to their library for free for a week using the “Get A Free Game Every Week” option on the Epic Games Store. The highlighted book will revert to its original price after that week.

Also Check   Should I play Quordle or Dordle?

Because Epic Games Store chose to make popular games like GTA V, Hitman, Dead by Daylight, and many more available to consumers for free, they gained even greater popularity among PC gamers.

You may mark your calendar if a game you enjoy will be given away for free using Epic’s list of upcoming games.

Comparatively on Steam vs Epic Games, On Steam’s end, they do provide free games, but they can only be downloaded and played for free for a limited period of time. After that, if you want to keep playing, you’ll have to pay. In a nutshell, Steam exclusively provides free trials.

Along with free games, Epic’s launcher also provides Unreal Engine, a program that turns users into creators. Its most recent version is available on the Epic Games Store for no cost to download. With the beginning developer tools for Unreal Engine, you may launch a career in game, app, or software creation. You can also use the lessons and resources in the Unreal Engine Marketplace to enhance your projects.

Although there isn’t a sizable selection of games from well-known companies, Epic gives you the opportunity to join them by providing developer-friendly tools. Additionally, compared to Steam’s 30% cut, Epic gets a lesser 12% share from projects that are released.

You can manage your project through the Epic Developer Portal after it has been published. You may manage your funds, assist customers, provide usage records and other statistical data, and change the information about your products here.

You can update your players on changes to your project via the Developer Portal. As a creator, you may also interact with your audience, develop relationships with them, and receive support.

You can examine the recently published and forthcoming features of Epic’s PC gaming client on the Trello page for the Epic Games Store. Here are two upcoming releases that will undoubtedly enhance your PC gaming experience:

Different versions of games are frequently packed together in PC gaming. If you currently own a few copies of a base title, you might decide against buying more of them.

If you already own a copy of a game that is part of the bundle, Epic Games automatically adjusts the price of the game bundle. In other words, the Epic Games Store will reimburse the difference on price-adjusted games, so you won’t be charged for the versions you already own.

The game of the year edition, the gold edition, the deluxe edition, and other edition designations used by developers are examples of different versions that some games may have. It can be perplexing for players who don’t have the time to scrutinize and contrast. The Epic Game Store’s Edition Comparison function is crucial because the price differences between various editions might be substantial.

You can compare different editions of a book side by side to determine whether the more expensive editions are worthwhile investing in or whether you should stay with the normal editions that cost less but have the same features.

You can play the games in your library on different devices that they are designed for using Steam’s Remote Play function. You can play games on devices other than your gaming PC if they are optimized for them, such as your phone, tablet, TV, or another PC.

Games that can be played on particular platforms are listed on Steam. For additional information, go to their page on remote play games.

The Remote Play Together functionality of Steam is a subset of Remote Play. It enables you to instantly invite anyone on your Steam friends list and share the multiplayer games in your library with them.

With Steam’s Remote Download functionality, you may manage your Steam library online without being on your computer. When you leave your Steam running on a different PC or Mac, this feature is activated.

Your Steam client’s interface is enhanced for usage with a TV and controllers via Steam’s Big Picture Mode functionality. This makes using a gaming controller while playing away from your typical PC setup easier.

You’ll note that buttons in Big Picture mode are designed to be used with game controllers with ease. Because the buttons are large, navigating is simple with the joystick and arrow buttons. Do you want to let your friends watch you play video games? It’s not necessary to carry it out outside of the Steam client. You can stream gaming content to both Steam and non-Steam buddies using its built-in live streaming feature. Another major advantage when you compare steam vs epic games.

1.You must adjust a few settings. Go to “Settings” by clicking “Steam” to accomplish this.

5.To begin your live broadcast, select “Not Broadcasting”. Two new windows will be opened. a broadcast chat one, and a broadcast broadcast one. There are many non-game items in the Steam marketplace. Additionally, it includes software, music, a portfolio of virtual reality hardware, Steam Deck, movies, TV series, game lessons, and a lot more. The variety of content is definitely one of the factors contributing to Steam’s current large library.

Of course, the PC gaming community is served by more than just Steam and the Epic Games Store. Other PC gaming clients you might want to look at include the following:

The CD Projekt subsidiary GOG.com is the ideal destination for PC gamers that enjoy retro games. It provides updated versions of classic games that can be played on modern gaming PCs without the need for additional software or hardware.

A refuge for both developers and gamers is itch.io. It’s a place where game developers can make games according to their preferences without interference from game publishing corporations. In summary, itch.io offers a platform for small and independent game developers as well as a gathering spot for players that enjoy indie games.

It’s surprising that most gamers don’t consider the Microsoft Store as a source for their PC games despite the fact that it’s a built-in Windows app. It has Xbox games that you can play on several platforms without owning the console, which is a great feature for gamers that like to play on many platforms.

The original prices for titles are the same if you look on Steam and Epic Games Store. Discounts make a difference, though. On occasion, one customer will offer a particular title for less money. However, both shops sell games for the same price when there are no discounts. You could say that Epic Games Store sells titles for less money if you count the week that they offer paid games for free (for free).

Yes. Even if the users purchased their copies from either Steam or the Epic Games Store, they can still play every game that is available on both clients. Actually, the gadget you’re using to play is more important. Not all games allow you to play with a friend on a PlayStation while you’re playing on your PC using cross-platform technology.

No. The only difference should be the client you used to download the game from, and that shouldn’t affect anything unless the developer releases an exclusive for the Steam or Epic Games Store. This indicates that the game’s version from that retailer has special features you won’t discover if you purchased it from a different PC gaming client.